The stillness of Gethsemane was broken by the noise created by a large multitude of people who came marching to where Jesus was praying. These people carried with them swords, staves, clubs, etc. as if they were coming after a very dangerous criminal. This multitude was sent by the chief priests and scribes.

Jesus did not resist arrest but rather He asked the leaders why they had not arrested him while he was teaching in the temple the past several days.

This mob then took Jesus to the house of one of the high priests and there is where the supposed court, that was going to try Jesus, was assembled.

In this mob were false witnesses who testified against Jesus. And after hearing some of this false testimony, the leaders declared Jesus guilty of blasphemy. Blasphemy means that a person tells and says things that are not in favor of God’s teaching. Jesus was telling the truth—He really was and is the Son of God.

Now, after all this false testimony, all that was lacking to put Jesus to death was the approval of the Roman governor.

This happening seemed to have occurred before daylight. The mob dared not go to the governor before the proper time; so they spent the time by spitting in Jesus’ face, slapping Him, striking Him with their hands, and making all manner of ridicule of Jesus for saying that He was the Son of God. 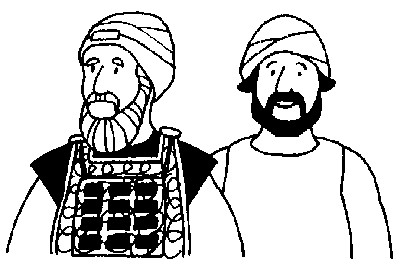 Christ died for the chief priests and He also died for you! Will you accept Him as your Saviour? “For God so loved the world that He gave His only Begotten Son that whoseover believeth in Him should not perish, but have everlasting life” (John 3:16)

“Then Jesus said unto the chief priests, and captains of the temple, and the elders, which were come to him, Be ye come out, as against a thief, with swords and staves? When I was daily with you in the temple, ye stretched forth no hands against me; but this is your hour, and the power of darkness.” (Luke 22:52-53)

“And they that laid hold on Jesus led Him away to Caiaphas the high priest, where the scribes and the elders were assembled.” (Matthew 26:57)

“Now the chief priests, and elders and all the council, sought false witness against Jesus, to put Him to death.” (Matthew 26:59)