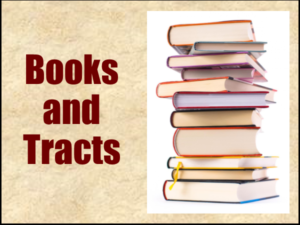 Grace Bible Church publishes Bible study books, booklets, and tracts as a ministry for the Lord. The materials are available free for your personal use or for use in teaching a Bible class. We have also made available certain of our Bible study books and booklets in eBook format, including ePUB (general eBook format) MOBI (Amazon Kindle format), and PDF (Acrobat Reader format). If you would like to order actual books or eBooks, just Contact Us, and we will be glad to send you the materials.
Grace Bible Church
1450 Oak Hill Rd
Fort Worth TX 76112