How to be Saved 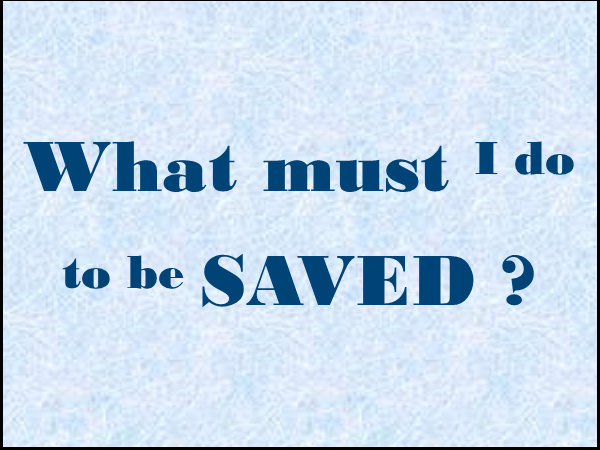 Men, women, young people, boys and girls are never saved in mass movement. Too often people throng to the alter in evangelistic meetings and make empty confessions. One follows another, and they are as the blind leading the blind. They all fall into the ditch together.

Only the moving power of the Holy Spirit can impress upon the minds and hearts of unsaved sinners the eternal and unalterable truth of the following scriptures.

“The heart is deceitful above all things, and desperately wicked; who can know it?” (Jer. 17:9)

“For the wages of sin is death; but the gift of God is eternal life through Jesus Christ our Lord.” (Rom. 6:23)

Any unsaved person, with a normal mind, having read and thought upon these verses, cannot escape being touched by the truth of them. The honest heart will immediately realize that these verses apply to every one in the human family.

If you have ever thought of yourself as being a just person; and one that doeth good, and sinneth not: then remember that your opinion of yourself clashes with the unalterable Word of God. He says you are not just, you cannot do good and live apart from sin. I urge you to bow before the Word of truth, accept it without a reservation, and take your place as an unjust sinner, standing in need of God’s mercy and grace.

The thing that is most important for us to learn, is that we can do nothing about this terrible condition. We are wholly dependent upon God’s mercy and grace. Apart from His mercy, we would have been in hell long ago. Apart from His grace, we would, at this present time, be entirely without hope.

Perhaps you feel that your clean, moral life; your good works; your membership in some church or lodge; or the fact that you give liberally to the church, to charity, etc., should be sufficient to give you a standing before God. Be not deceived by such thoughts. God has spoken, and His Word is that all have sinned, and come short of the glory of God. Without Christ, the very best of people are far short of His glory.

The last verse in the above quotations carries the one hope for you, or for any other member of the human family. Even though, the wages of our sin brings eternal death to our souls, God has provided for the quickening, or making alive of those who are dead in trespasses and sins. This quickening power is in His love gift to the world, even the gift of His own dear Son. God’s gift of eternal life to sinners is included in the gift of His Son.

“For God so loved the world, that He gave His only begotten Son, that whosoever believeth in Him should not perish but have everlasting life.”

“For God sent not His Son into the world to condemn the world; but that the world through Him might be saved.”

The truth in these verses cannot be measured in heights nor depths, in length nor breadth. The only begotten Son of the Father came down from the heights of glory to live among men. He humbled Himself and became obedient unto death, even the death of the cross, which took Him to the depths of hell, as our substitute. The love manifested at Calvary reaches to the east, to the west, to the north, to the south, even as far as the habitation of any lost soul. The whosoever of the above quotation includes you, it included me, it included all who have lived from the day of Adam to the last man that shall live on the earth.

We need to remember that the only difference between the saved and the unsaved is that the saved have the Saviour, and the unsaved have no Saviour. “All have sinned and come short of the glory of God.” Therefore all are condemned. Every son of Adam, who has reached the age of accountability, stands condemned before God until he or she believes in the name of the only begotten Son of God.

I trust that our unsaved readers will not hesitate to believe. Regardless of what your sins may be, even if you have gone into the very mire of sin, do not hesitate to trust Him who died for your sins. His blood cleanses from all sins.

I also hope that you will not feel that it is necessary for you to be in some revival meeting or some church gathering in order to be saved. You do not even need to be in the presence of a preacher. You only need to realize your lost and undone condition, as set forth in the first list of quotations mentioned above, and then believe that which is set forth in the last list of verses quoted above.

In closing I say to you, in all sincerity, that which Paul said in 1 Corinthians 15:3-4:

Believe this wonderful gospel message and you will be saved!

Join us in the auditorium for a time of worship and praise to our God and Savior and hear a clear message from God’s Word.
6:00 pm Evening Worship
Evening Worship
Nov 27 @ 6:00 pm – 7:00 pm