What Must I Do to be Saved?

I want to tell you about a little boy named Tom. Tom had heard his mother talk about heaven, and the Lord Jesus. He knew he would surely love to go to heaven and be with the Lord. Tom decided that he must be very good, so he could go to heaven. He tried very hard, but soon he found himself getting angry and doing things that he knew he shouldn’t. Then one day, because he thought he would be punished for something he did, he told his mother a lie, saying he didn’t do it. Poor Tom, he realized with much sadness that he just couldn’t be good enough!

He was feeling very sad, but then another idea came to him. He would get some odd jobs to do and earn money and give part of it to the Lord. He did this, and finally, instead of giving a part of the money, he gave all he made to the Lord’s work. But one day when he was attending church, he heard the preacher read from the Scriptures which showed that no one could buy their way into heaven. Tom realized this was what he had been trying to do. Once again he felt sad and thought he had failed.

After a while he thought of something else he should try. He would go to church regularly. He went to Sunday School each Sunday and stayed for the services afterward. He went back on Wednesday nights. But alas, one day he listened to another message which showed that no one would ever get to heaven unless they had the Lord Jesus Christ as Saviour. The pastor read Romans 3:23, “For all have sinned and come short of the glory of God.” Tom knew then that he was a sinner, and a sinner could never be good enough to go to heaven. The preacher showed that doing good could come after a person had the Lord Jesus as Saviour, because the Lord would help him to do the right things. He also showed that giving money to the Lord’s work, and being in services as much as possible were good things to do after we are saved. But these things could never save a person’s soul.

For the first time little Tom realized the full meaning of the Scriptures that he had been hearing. He was thankful that he had been coming to church to hear the Word. He never would have known how to be saved if he had not heard the Word. He now realized that he was a sinner, but that Christ had died for his sin. He sat in his seat feeling miserable. He realized that he was so ungodly. He continued to listen to the preacher. The preacher said, “God so loved the world that He gave His only begotten Son that whosoever believeth on Him should not perish, but have everlasting life.” As Tom listened, he thought that surely he did believe in God and the Lord Jesus—didn’t everyone? Then he heard the preacher quote another Scripture, “That if thou shalt confess with thy mouth the Lord Jesus and believe in thine heart…;” then, Tom realized what he must do. He must believe in his heart—accept the Lord as Saviour! He had only been believing in his mind, and not accepting in his heart. As the preacher asked all to bow in prayer, Tom began to silently pray and ask the Lord Jesus to come into his heart.

When the preacher ended his prayer, Tom jumped up and went up to the preacher to tell him that he had accepted the Lord Jesus in his heart, and that now he knew he was going to heaven.

After Tom had the Lord as his Saviour, he found it was much easier to do good things. He found he wanted to go to church and Bible classes. He didn’t have to force himself. He found that he could also give his money to the Lord. He realized that he had to be saved first, and then be a worker for his Lord. “For we are His workmanship, created in Christ Jesus unto good works which God hath before ordained that we should walk in them.” Ephesians 2:10.

Have you accepted the Lord Jesus as your Saviour? If so, are you now working for Him, serving Him, and worshipping Him?

“For by grace are ye saved through faith, and that not of yourselves, it is the gift of God, not of works, lest any man should boast.” (Ephesians 2:8-9)

“For God so loved the world that He gave His only begotten Son, that whosoever believeth in Him should not perish, but have everlasting life.” (John 3:16) 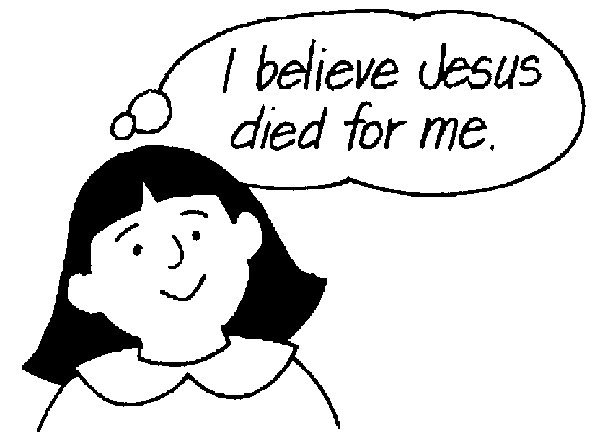 All My Class for Jesus

My pupils all for Jesus, this be my earnest prayer,
For they are souls immortal, intrusted to my care;
For each the Master careth, longs so much for each;
Grant, Lord, Thy promised wisdom, their wayward hearts to reach.

My girls, lighthearted, thoughtless, on trifling things intent—
They cost a priceless ransom, on them my care be spent—
That each a willing handmaid, may be brought to own her Lord;
Whate’er He says, to do it; obedient to His Word.

My boys I want for Jesus — my wayward, wandering boys;
So full of life and mischief, so charmed by earthly joys.
For them the Saviour suffered, for them His life was given;
Lord, by that holy ransom, bring all my boys to heaven.

Lord, be in every lesson, bless every faltering word
My trembling lips may utter, to bring them to Thee, dear Lord.
So fleeting are the moments of opportunity!
O, Jesus, Lord and Saviour, bring all my class to Thee.