“For the wages of sin is death: but the gift of God is eternal life through Jesus Christ our Lord.” (Romans 6:23)

“Know ye not that the unrighteous shall not inherit the kingdom of God?” (1 Corinthians 6:9)

“And the Lord God formed man of the dust of the ground and breathed into his nostrils the breath of life, and man became a living soul.” “So, God created man in His own image, in the image of God created He him; male and female created He them.” “And the Lord God commanded the man, saying, Of every tree of the garden thou mayest freely eat; but of the tree of the knowledge of good and evil, thou shalt not eat of it, for in the day that thou eatest thereof thou shalt surely die.” “And when the woman saw that the tree was good for food, and that it was pleasant to the eyes, and a tree to be desired to make one wise, she took of the fruit thereof, and did eat, and gave also unto her husband with her; and he did eat.” 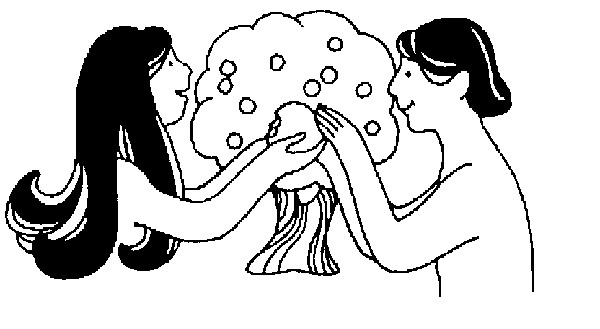 In these passages of Scripture we see the complete story of the first disobedience to God by man. In the last lesson, we saw Scriptures that showed us that we all are sinners. That is because we all came from sinful parents, Adam and Eve. As you see in the passages above, God told Adam and Eve that in the day that he disobeyed he would surely die. Many times people think that God was wrong because they say that Adam and Eve did not die that day. How wrong that thought is. Adam’s body surely began to die that very day, and that is why we will all experience physical death some time or other. But the most important thing about this is that Adam and Eve died spiritually that very day. They were no longer innocent and righteous. They were sinners. The wages of sin is death, and Adam and Eve became spiritually dead when they first disobeyed God. They yielded to the lust of the flesh, the lust of the eyes, and the pride of life and became sinners. Sin brought death.

What a sad state to be in. What a sad picture of all the human race. But thanks to our Lord, He made the way of escape when He died on the cross of Calvary to pay the price for our sins. He was the only perfect One that could pay the debt. Accept Him, and you can be out from under the penalty of sin.