The Two Main Divisions of Scripture 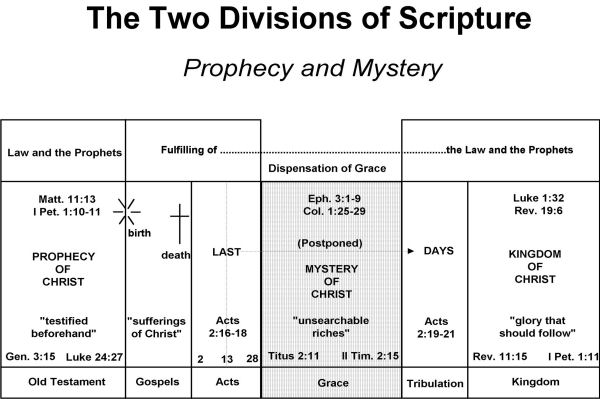 “Of this salvation the prophets have inquired and searched carefully, who prophesied of the grace that would come to you, searching what, or what manner of time, the Spirit of Christ who was in them was indicating when He testified beforehand the sufferings of Christ and the glories that would follow.” (I Pet. 1:10-11)

The apostle Peter makes reference here to the Scriptures of the Old Testament prophets. The subject of their writings was the salvation of God that was to be provided through Israel’s Christ (Messiah). These prophets are said to have inquired and searched diligently, seeking to understand what the Scriptures, which they were given to write, testified about the Christ. The problem they faced is that the prophecies presented two very different views concerning the Christ: (1) the sufferings of the Christ and (2) the glories that would follow. The prophesied programs of God are depicted on the chart with a white background.

The Sufferings of Christ

The sufferings of the Christ were prophesied in such passages as Isaiah 53 and Psalm 22, both of which present vivid pictures of the crucifixion of the Christ. The sufferings of Christ began when He became a man and took upon Himself the form of a servant (Phil. 2:5-8). They continued as He experienced the same trials and tribulations that any human being faces in life.

“For we do not have a High Priest who cannot sympathize with our weaknesses, but was in all points tempted as we are, yet without sin.” (Heb. 4:15)

Christ’s sufferings culminated when He died a cruel death on the cross of Calvary. He not only experienced the physical pain of such a death, but also the great humiliation that went with it. Yet, the greatest pain He faced on the cross came because of us; because of our sin. As He hung there on that cursed tree (Gal. 3:13), He bore the weight of the sins of the whole world in His body (I Pet. 2:24). He became sin for us, that we might become the righteousness of God in Him (II Cor. 5:21). What did this mean for Jesus? It meant that He had to go through the agony of separation from God, His Father. This is why He cried out in agony, with a loud voice, saying, “My God, My God, why have You forsaken Me?” (Matt. 27:46), words that were prophesied in Psalm 22:1.

After Jesus was raised from the dead, He met with His disciples and taught them, “opening their understanding, that they might comprehend the Scriptures.” And He said to them,

“Thus it is written, and thus it was necessary for the Christ to suffer and to rise from the dead the third day.” (Luke 24:46)

When Peter preached to Israel in Acts 3 he spoke to them of their crucifixion of the Lord Jesus Christ, and he stated that what they had done, in ignorance, was used of God to fulfill, “those things which God foretold by the mouth of all His prophets, that the Christ would suffer” (Acts 3:18).

The Old Testament Scriptures speak of the glories of the Christ as well. The Christ is seen coming in power and great glory to execute judgment upon the earth and to deliver Israel from their enemies (Isa. 2, Zech. 14). The Christ is seen established as King over all the earth with Israel ruling and reigning with Him as a kingdom of priests (Psalm 2, 24, Isa. 9:6-7, Jer. 30:8-9, Ezek. 37:24-28).

These two different viewpoints of the Christ must have been confusing to those who lived in Old Testament times. When Jesus came, He was not what they expected in their Messiah. They weren’t looking for a lowly, suffering Messiah, but for a powerful Messiah who could and would bring deliverance for Israel. He became “a stone of stumbling and a rock of offense” (Isa. 8:14, I Pet. 2:8), “the stone which the builders rejected” (Psalm 118:22, Acts 4:11, I Pet. 2:7), but, as a result, He became “the chief cornerstone” (Isa. 28:16, I Pet. 2:6).

In Peter’s message to Israel in Acts 3, he made reference to the fact that the prophecies concerning the sufferings of the Christ had been fulfilled (vs. 18). Based on this fact, he then could make the following offer to them:

“Repent therefore and be converted, that your sins may be blotted out, so that times of refreshing may come from the presence of the Lord, and that He may send Jesus Christ, who was preached to you before, whom heaven must receive until the times of restoration of all things, which God has spoken by the mouth of all His holy prophets since the world began.” (Acts 3:19-21)

If Israel, as a nation, would repent of crucifying the Christ, and would turn back to the Lord, then “the times of refreshing” would come from the presence of the Lord and He would send Jesus Christ back to the earth to judge and to establish the long promised kingdom to Israel. Peter spoke of these things as “the restoration of all things spoken by the mouth of all His holy prophets since the world began.” These events constitute what Peter calls in I Peter 1:11, “the glories that would follow.”

At the time Peter made this offer, there were no other prospects known. Nothing was known about the church, the body of Christ. At this time the church remained a mystery, or a secret, hidden in God (Eph. 3:1-9). The only things known at this time were those that were spoken about by the prophets: “the sufferings of Christ and the glories that would follow.” As far as Peter knew, the next events to occur were the “last days” that would result in Christ’s return and kingdom. In fact, when Peter explained the meaning of the events that occurred at Pentecost he stated, “This is what was spoken by the prophet Joel” (Acts 2:16). He then quoted Joel 2:28-32, which describes the “last days.”

The first portion of the book of Acts was the beginning of the last days. When Israel again rejected their Christ by persecuting and killing the apostles, then the fulfillment of the last days, and the glories to follow, were postponed.

The mystery is that body of truth that was kept a secret, or hidden, until God chose to reveal it to His servant, the apostle Paul. We looked at this mystery in detail in the last chapter. Today we are living in this unprophesied period, which Paul refers to as the dispensation of grace, a period in which God is dealing with the church, the body of Christ. This mystery program is depicted on the chart with a shaded background. God has postponed His prophesied program for Israel until He completes His church. When the church is complete and has been caught up into glory, then God will resume His dealings with Israel.

The last days that were begun in the book of Acts, will be resumed. Israel will experience a time of great tribulation which will be brought to a close by the return of Christ back to the earth. He will come in power and great glory to judge, make war, and establish His kingdom upon the earth. Once again, these events constitute what Peter calls, “the glories that would follow.”

Many of the problems people have today in understanding the Bible are caused by confusing these two divisions of Scripture. Many want to take things that were and will be a part of God’s prophesied program, which was directed to Israel, and apply them to God’s unprophesied program, the mystery, which is directed to the church of this age. This only results in confusion. This is why Paul stressed,

“Be diligent to present yourself approved to God, a worker who does not need to be ashamed, rightly dividing the word of truth.” (II Tim. 2:15)

If we truly desire to be workers who are approved of God and who do not need to be ashamed, we must rightly divide the Word of truth. We must make this key distinction between prophecy and mystery. We must see and understand that we live in a unique dispensation, with unique promises and requirements. Only then can we live a life that accords with God’s purpose for us as members of His church today.