During the Christmas holidays, peoples thought often turn to Jesus. What was so special about the birth of Jesus that it is celebrated worldwide? Who is Jesus and what was so special about His life on this earth? Most people don’t really understand the true meaning of Christmas, including many who consider themselves “Christians.” Most people’s thoughts rarely go beyond the babe lying in a manger. The listen to and sing traditional Christmas carols without ever thinking about the words and message contained in these songs. Consider the lyrics from these songs:

“Hark! the Herald Angels Sing” includes the words, “God and sinners reconciled,” as a result of Christ’s coming.

“O Holy Night!” describes “the night of our dear Savior’s birth.” The world “long lay … in sin and error pining, till He appeared and the soul felt its worth.”

The 3rd verse of “O Little Town of Bethlehem” says: “How silently, how silently, the wondrous Gift is giv’n! So God imparts to human hearts
the blessings of His heaven. No ear may hear His coming, but in this world of sin, where meek souls will receive Him still, the dear Christ enters in.”

“God Rest Ye Merry, Gentlemen” admonishes its hearers to, “Let nothing you dismay. Remember Christ our Savior was born on Christmas Day, to save us all from Satan’s power when we were gone astray.”

Jesus’ coming into this world was unique. The conception and birth of a person marks when they come into existence. Not so with Jesus Christ. John’s gospel account opens with the words:

Jesus Christ, God’s Son, is described as the Word of God. In the beginning, when the world was created (Gen. 1:1), the Word already “was,” meaning He already existed, making Him eternal. He existed with God and He existed God, thus declaring His deity. John, led by the Holy Spirit, makes it clear that Jesus Christ, the Son of God, was not created, for “without (lit. apart from) Him, nothing was made that was made.” Anything that was made or created, was made or created by Him, as Paul says in Colossians 1:16, “For by Him all things were created that are in heaven and that are on earth, visible and invisible, whether thrones or dominions or principalities or powers. All things were created through Him and for Him.”

John goes on to write in John 1:14 that, “the Word became flesh and dwelt among us, and we beheld His glory, the glory as of the only begotten of the Father, full of grace and truth.” While the Son of God has always existed, He has not always existed in a body of flesh. This is what happened when Jesus was conceived in the womb of the virgin, Mary—He “became flesh and dwelt among us” in a body like ours, “yet without sin” (Heb. 4:15). The word “dwelt” in John 1:14 literally means “tabernacled” or took up a temporary dwelling place in this body of flesh.

This experience was unique. No one else’s conception and birth was like that of our Savior, where a person who already exists, in spirit form, takes on a body of flesh, which is why we speak of His coming into this world as an “incarnation.”

Why is Jesus called “the Word” (Gr. logos)? What is the purpose for “words?” They are used to express thoughts, ideas, or concepts. Jesus Christ is the Word of God. He expression to us the person of God, allowing us to see and understand God in a way never experienced before. Before Christ was born, God spoke to the fathers of His people, Israel, through His prophets (Heb. 1:1). He communicated His message to these prophets at different times and in different ways, including direct revelation, visions, dreams, or signs. But with the coming of Jesus Christ into the world, God spoke to them “by His Son” (Heb. 1:2).

What does this mean, God spoke “by His Son?” Jesus was certainly the greatest Teacher who ever lived. He was the Prophet Moses said would come. The Lord spoke to Israel of His coming, saying:

“I will raise up for them a Prophet like you from among their brethren, and will put My words in His mouth, and He shall speak to them all that I command Him. And it shall be that whoever will not hear My words, which He speaks in My name, I will require it of him” (Deut. 18:18-19).

But, though God did put His words into Jesus’ mouth to preach (John 3:34), He was more than just a Prophet. Jesus was and is very God Himself. Though He dwelt on this earth in a body of flesh, this did not diminish His deity, “for in Him dwells all the fullness of the Godhead bodily” (Col. 2:9).

The expression from Hebrews 1:2 that God spoke “by His Son,” literally means “in His Son.” John said of Jesus, even dwelling in a body of flesh, “We beheld His glory, the glory as of the only begotten of the Father, full of grace and truth” (John 1:14). John also wrote, “No one has seen God at any time. The only begotten Son, who is in the bosom of the Father, He has declared Him” (John 1:18). God cannot be seen because He is Spirit (John 4:24). However, when the Son of God was made flesh and dwelt among men, He “declared” God. This word “declared” literally means “to lead out” where it can be seen and known.

Though Jesus emptied Himself of the form and glory He had with the Father and took the form and appearance of a man (Phil. 2:5-7), He still displayed the glory of God—not a physical glory, but the express image of God’s glorious person (Heb. 1:3); His love, mercy, and grace; His holiness and righteousness; His faithfulness and truth. 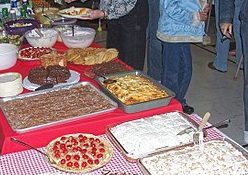