Toward the end of Daniel’s life, he received a vision from the Lord that seventy weeks or “sevens”(490 years) had been determined, or “marked out” for the people of Israel and for the holy city, Jerusalem. These seventy weeks determined how God would fulfill His future plans and purposes for His chosen people, Israel. The seventy weeks were divided into three periods: seven weeks (49 years), beginning from the time of the commandment to restore and build Jerusalem (cf. Neh. 2), sixty two weeks (434 years), which would last until the cutting off of Messiah the prince (i.e. the death of the Lord Jesus Christ), and one week (7 years), which is marked from the confirming of a covenant between the future Antichrist and the people of Israel. A chart depicting this prophetic plan is provided below. 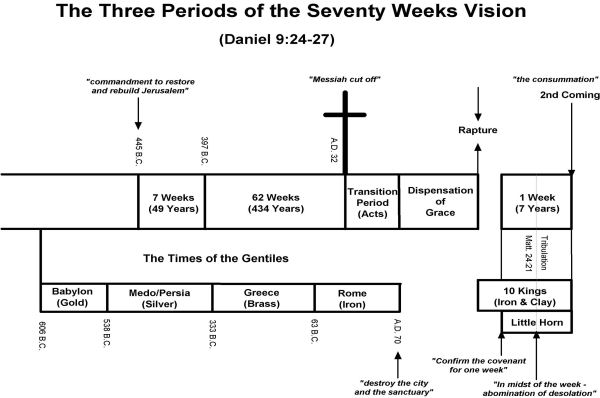 The prophetic program God has marked off for Israel and Jerusalem, is currently suspended to allow God to fulfill His plan and purpose for the church, the body of Christ. The first sixty-nine weeks (483 years) of Daniel’s prophecy have already been fulfilled, but the remaining week (7 years) will not begin until God completes the church of this age, and takes us home to be with Him in glory.

Following the rapture of the church, God will resume His dealings with the nation of Israel, and events will be set in motion to complete all the prophecies that have been made throughout the Scriptures.

Sometime after the church age closes (we do not know how long this will be), the “man of sin will be revealed” (II Thess. 2:3). This is Satan’s specially chosen man, commonly called the Antichrist. His rise is described in detail in such Scriptures as Daniel 7-8, where he is called “the little horn,” Daniel 11, where he is referred to as “a vile person,” and Revelation 13 and 17, where is described as “the beast.” In Daniel 9:26-27, he is the “prince who is to come.” As he rises in power, he will make a covenant with the people of Israel that is to last one week (7 years), allowing them to worship in their temple in Jerusalem (which will be rebuilt before these events take place).

The Abomination of Desolation

In the middle of this seven year period, that is after three and a half years, the Antichrist will break his covenant with Israel. He will “bring an end to sacrifice and offering” (Dan. 9:26) and he will place something in the holy temple in Jerusalem that will be an abomination to the Lord; something that will cause the temple to become desolate or empty. There is some difference of opinion as to what this abomination is. Some feel that the Antichrist will enter and seat himself in the holy of holies and proclaim himself to be God (II Thess. 2:4). Others believe that the image of the beast, that is described in Revelation 13:14-15, will be set up in the holy of holies and people will be forced to worship it or be killed. In either case, this event will begin a reign of terror by the Antichrist, as he is empowered by the dragon (Satan) and supported by the beast out of the earth (false prophet).

As Jesus spoke to His disciples on the Mount of Olives, He described to them what the last days of God’s prophetic program for Israel would be like, and He warned them of this terrible event.

“Therefore when you see the abomination of desolation, spoken of by Daniel the prophet, standing in the holy place” (whosoever reads, let him understand), “then let those who are in Judea flee to the mountains. … For then there will be great tribulation, such as has not been since the beginning of the world until this time, no, nor ever shall be.” (Matt. 24:15-16,21)

These verses describe a time of tribulation and persecution for Israel unlike any they have ever experienced. Jeremiah calls it “the time of Jacob’s trouble” (Jer. 30:7). The Antichrist will make war with the saints and will overcome them. People will be taken captive. Many will be killed with the sword (Rev. 13:7-10). They will be forced to worship the Antichrist and his image, or be killed. People will be forced to take the mark of the beast in order to either buy or sell. Despite all of this, God’s future for the nation Israel is their salvation (Jer. 30:7; Rom. 11:26-27).

“Behold, the days are coming, says the Lord, when I will make a new covenant with the house of Israel and with the house of Judah— … I will put My law in their minds, and write it on their hearts; and I will be their God, and they shall be My people. … for they all shall know Me, from the least of them to the greatest of them, says the Lord. For I will forgive their iniquity, and their sin I will remember no more.” (Jer. 31:31-34)

While Satan’s plan is unfolding through the work of the Antichrist and the false prophet, God is in control of all the events we see happening. They only occur as God allows, and as God directs. This is seen as we read the book of the Revelation that was given through the apostle John. In chapter 1 we find God giving the revelation of all these events to John that they may be made known to God’s servants, His people Israel. In chapters 2 and 3 we see God’s solemn warnings and instructions to the people who will experience these events. In chapters 4 and 5 we see that God is on the throne and in control. We see the Lord Jesus Christ, the Lamb of God who was slain for the sins of the world, take the seven-sealed book, which will unveil these end-time events, and open the seals. God initiates all the events described in the Revelation, including the time the Antichrist will rise.

In chapters 6-18, we watch as God sets in motion a series of events which work to bring about the redemption of His people, Israel. Just as the Lord delivered the children of Israel from Egyptian bondage through a series of plagues (Exo. 1-15), so the Lord will deliver them in the future. While Satan is actively persecuting, and even attempting to destroy Israel (Rev. 12:13-17), God will bring a series of judgments upon the earth which will result in Israel’s redemption from bondage. These judgments begin with the opening of the seven seals (Rev. 6-7), which usher in the blowing of seven trumpets (Rev. 8-11), which end in the pouring out of seven bowls which are full of the wrath of God (Rev. 15-16).

The sixth bowl of God’s wrath is poured out in Revelation 16:12-16. Unlike the previous five bowls, which have resulted in death and destruction on the earth, the purpose of this bowl is to prepare for a battle between the dragon (Satan), and the Lamb (the Lord Jesus Christ). The kings of the east, along with their armies, will be gathered together to the “battle of that great day of God Almighty” (Rev. 16:14). They will gather in a place that is called in Hebrew, “Armageddon” (Rev. 16:16). They will gather to “make war with the Lamb” (Rev. 17:14). What a futile thing they attempt to do, just as the Psalmist wrote,

“Why do the nations rage, and the people plot a vain thing? The kings of the earth set themselves, and the rulers take counsel together, against the Lord and against His anointed, saying, ‘Let us break Their bonds in pieces and cast away Their cords from us.’ He who sits in the heavens shall laugh; The Lord shall hold them in derision. Then He shall speak to them in His wrath, and distress them in His deep displeasure.” (Psalm 2:1-5)