The Promised Seed Through Israel

When God called Abram out from among the Gentile nations to be the father of a new nation, Israel, He made many promises to Abram (Gen. 12:1-8). This call and these promises marked a significant change in God’s dealings with mankind, hence, we mark this as the beginning of a new dispensation; that of PROMISE. Once again, we must note that many of the conditions which existed under the dispensations of HUMAN GOVERNMENT and CONSCIENCE continued into the new dispensation.

The key promise made to Abram was that of a “seed” through whom God would bless all families of the earth (Gen. 12:3). In fact, in Genesis 17:5, God changed Abram’s name to Abraham, because he was to be a “father of many nations.” Though Abraham gave birth to a son, Ishmael, by his wife’s handmaid, Hagar, God told him that he and his wife, Sarah, would have a child who would be called Isaac. At the time this promise was made, Abraham was ninety nine years old and Sarah was eighty nine years old. Abraham’s initial response to God was, “Oh, that Ishmael might live before You!” God’s answer to Abram was,

“… No, Sarah your wife shall bear you a son, and you shall call his name Isaac; I will establish My covenant with him for an everlasting covenant, and with his descendants after him.” (Gen. 17:19)

The expression “everlasting covenant” shows that the promised seed extended beyond just Isaac, and pointed to the ultimate Seed, the Lord Jesus Christ, who is called in Matthew 1:1, “the Son of Abraham.”

As we trace the descendants of Abraham, we find the lineage of Christ to be through Abraham, then through Isaac, the child of “promise” (Rom. 9:9), and then through Jacob, Isaac’s second son (Gen. 27-28). In Genesis 32:28, we read that God changed Jacob’s name to Israel and blessed him. We read in Genesis that Jacob, or Israel, gave birth to twelve sons, from which sprang the twelve tribes of Israel.

In Genesis 49, we find Jacob (Israel), from his death bed, blessing each of his twelve sons, as well as Joseph’s two sons. These blessings were also prophetic, for they indicated what would be the future for the tribe that would come through each of his sons. In blessing his fourth son, Judah, he made the following prophetic statement,

“The scepter shall not depart from Judah, nor a lawgiver from between his feet, until Shiloh comes; and to Him shall be the obedience of the people.” (Gen. 49:10)

The word “Shiloh” means “peace or rest.” It is clear from the next phrase, “and to Him shall be the obedience of the people,” that Shiloh refers to a Person; a Person who is to be descended from the tribe of Judah. The prophecy states that Judah will not cease to be a tribe and a royal line until “Shiloh” comes. But who is this “Shiloh?” The answer is found in Isaiah 9:6 where we see “the Christ” referred to as the “Prince of Peace.” This prophecy indicated that the promised “Seed” of the woman and the “Seed” of Abraham was to come through the tribe of Judah. He is called in Revelation 5:5 “the Lion of the tribe of Judah” (cf. Gen. 49:9).

When the angel appeared to Mary announcing the coming birth of the Lord Jesus, he made the following pronouncement:

“He will be great, and will be called the Son of the Highest; and the Lord God will give Him the throne of His father David. And He will reign over the house of Jacob forever, and of His kingdom there will be no end.” (Luke 1:32)

This announcement answers to the promises given to David back in II Samuel 7:12-16, where God promised to set up David’s seed after him and to establish his kingdom. This promised seed was to build a house (i.e. the temple) for the Lord and the throne of his kingdom was to be established forever. The “seed” refers initially to Solomon, who was used of God to actually construct the first temple, but ultimately the “Seed” refers to the Lord Jesus Christ, who will one day sit upon the throne of His father David (Matt. 1:1) and rule and reign forever. The Christ, the promised Seed, was to be descended from the nation, Israel, the tribe of Judah, and the family of David.

“Therefore the Lord Himself will give you a sign: Behold, a virgin shall conceive and bear a Son, and shall call His name Immanuel.” (Isa. 7:14)

Here, the prophecy is made that the Christ will be born to a virgin. The importance of this prophecy is seen in the angel’s announcement to the virgin Mary in Luke 1:31 and 35.

“And behold you will conceive in your womb and bring forth a Son, and shall call His name Jesus. … The Holy Spirit will come upon you, and the power of the Highest will overshadow you; therefore also, that Holy One who is to be born will be called the Son of God.”

While it is true that the Lord Jesus would become a man (John 1:14), He did not receive a heritage of sin from an earthly father, for His Father was God in Heaven; therefore it could be said that He was “in the likeness of sinful flesh” (Rom. 8:3) and “yet without sin” (Heb. 4:15). His sinlessness made it possible for Him to offer Himself as the perfect sacrifice for the sins of the world (Heb. 9:14). 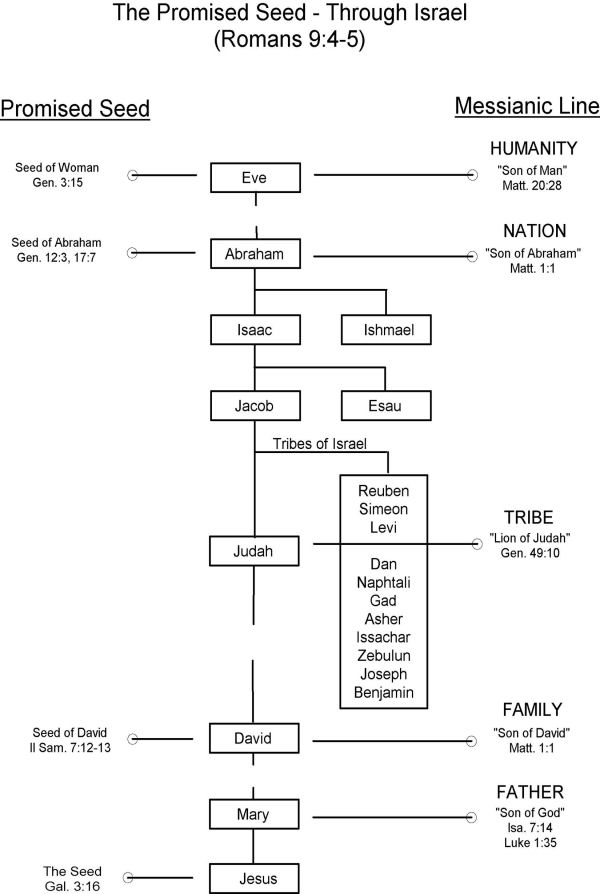