The Lord had said that Paul would witness to the Jews, Gentiles and to kings. Paul was faithful to carry out any thing the Lord showed him to do. It took complete trust on Paul’s part to fulfill his ministry.

We have seen how Paul ministered to the Jews, and then turned to the Gentiles in different places. But how was he to have the opportunity to witness to those in authority? Paul went through some suffering before this could be accomplished, but was so happy for the privilege of giving out the message concerning his Saviour and Lord. 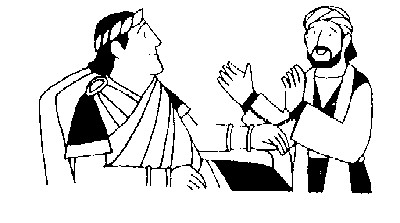 As we have seen in previous lessons, the Jews hated Paul because of the message he would give them. He would preach the truth that Jesus, whom they had crucified was truly the Son of God and that He had risen from the dead. To get rid of Paul, the Jews began to accuse him before those in authority. We find in Acts 24that Paul was brought before Felix, the governor. Here was Paul’s chance to witness to him. Paul told the truth about how he was himself going about persecuting believers and how the Lord had saved him and gave him a command to go witness to others. In verse 25 of Acts 24, we read,

“And as he reasoned of righteousness, temperance, and judgment to come, Felix trembled, and answered, Go thy way for this time; when I have a convenient season, I will call for thee.”

When Paul came before King Agrippa, he again witnessed concerning the Lord Jesus. In verse 28 of Acts 26, we read what King Agrippa said to Paul.

“Then Agrippa said unto Paul, Almost thou persuadest me to be a Christian.” Paul’s answer was, “I would to God, that not only thou but also all that hear me this day, were both almost, and altogether such as I am, except these bonds.”

In these chapters in the book of Acts, we see that Paul was brought before Festus and Caesar, as well as Felix and King Agrippa. There was no hesitation to witness to all of them concerning the Lord Jesus. By the Scriptures above, we see how the message affected them. Thus Paul had fulfilled the commission from the Lord to minister to Jews, Gentiles, and kings.

As we see how faithful Paul was to witness for the Lord it should speak to our hearts. Certainly we should be ready to witness for our Lord at every opportunity. Many times we have opportunities to speak, and yet are a little afraid of those around; or perhaps we are just too timid. Paul is surely an example to us of how God can work through any who will just yield themselves to Him and love Him enough to want to speak of His goodness and righteousness. If you know the Lord as Saviour, and as your Lord you may have the privilege and opportunity to witness for Him by speaking and by living for Him. There is such a blessing to see someone who becomes a believer because we have witnessed to them. Don’t let the old devil rob you of this blessing.