In this chapter of Acts, we find again that Paul was going around trying to get rid of all who were preaching that Jesus was the Christ, the Son of God. In verse 1, notice who was working with Paul to do these terrible deeds. It was the high priest. Verse 2 tells us, “And desired of him (the chief priest) letters to Damascus to the synagogues, that if he found any of this way, whether they were men or women he might bring them bound unto Jerusalem.” He got his authority from the priests, the religious leaders of the Jews, to put all men and women in jail if they preached the true message about Christ. 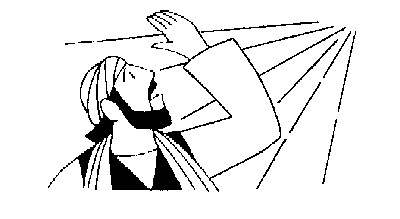 However, in verses 3 to 9 of the 9th chapter, we see something wonderful happening to Paul. As he journeyed toward Damascus to carry out these wicked deeds, suddenly there was round about him a great light from heaven. In verse 4 we read, “And he fell to the earth, and heard a voice saying unto him, Saul, Saul, why persecutest thou me?” Now read verse 5 to see what Paul did. Yes, he spoke out to the voice and asked, “Who art thou, Lord?” Did you notice Paul called Him Lord? He seemed to know immediately that it was the Lord speaking to him. And it was the Lord! This is how this man Paul, was saved. It was here that he saw the wickedness of his actions, and how wrong he was. He realized that Jesus surely was the Son of God. From this time on, Paul was a changed man and began to help preach about Christ, instead of doing wicked things to the true believers of Christ. In verse 6, we hear Paul saying, “Lord, what wilt thou have me to do?” This really shows that Paul had accepted Jesus not only as Saviour, but also as Christ and Lord. He now wanted to do what the Lord wanted him to do, not just what he wanted to do himself. In the next lesson we will see what answer the Lord gave Paul.

As you read this lesson, I hope you will search your own heart. Are you just “religious,” that is just trying to do something you think is right? Or are you a true Christian? No matter how much religion we have, no matter how much good we think we are doing, without Christ as Saviour, we are not saved—we are not Christians. If any one of us could be good enough to get to heaven on our own, then Christ would have had no need to die.